Dan Holloway writes for the Guardian Books Blog, is the co-author of the Alliance of Independent Authors’ book Opening Up to Indie Authors, is a poet and self-published author. We asked him to tell us about his 6 years experience in self-publishing. 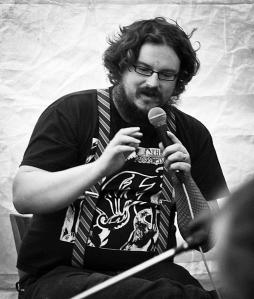 In many ways I feel as though I’ve gone through a looking glass in the 6 and a bit years I’ve been self-publishing. And not just because I’m from Oxford where you have to double-check every latte in case the small print screams “drink me”.

When I self-published in 2009 it was less of a choice and more of a rallying cry. I was one of 22 writers from 8 countries who had met on the recently defunct Harper Collins site Authonomy and formed the self-publishing collective Year Zero Writers. We had one thing in common – we wrote on a spectrum that cut a swathe from niche to quirky through every shade of experimental. We had all seen a publishing industry shrinking away from any book that didn’t come with “shelve next to…” in a parenthesised subtitle and “you’ll love it if you loved…” in a puff quote from Stephen Fry.

For two years we had the most exhilarating ride, dodging sneering snipes from fellow writers, most of whom have gone on to self-publish, as we experimented with form and performed some truly electric gigs alongside artists and musicians at venues ranging from galleries to Rough Trade, even piquing the interest of a curious press.

It was a literary lifestyle that went with our writing. In self-publishing we had found our home, a scattershot ramshackle warren where sentences had been left to decay into rhizomes and the last few wounded rules of syntax waited for us to upcycle them into something garish and glorious with pictures and hyperspace and passion.

Meanwhile two things had happened. Kindle had appeared in the UK and like the first few artisanal quinoa bars brought a drip then a trickle then a full-on self-publishing revolution of authorpreneurs. Like Shoreditch on a sunny September afternoon, this is a bustling vibrant exciting place to be but there isn’t much space for those of us who used to live there, just a few pitying looks and the occasional cautiously offered chair for those of us still haunting the streets – but only if we don’t talk to anyone’s important friends.

At the same time publishing was changing in exciting ways. One day I found myself in my local independent bookshop nattering over coffee with a wonderful enthusiastic guy who had a few scrawled notes and some bizarre ideas about subscription, crowdsourcing and overseas fiction that he enthused about so sincerely and passionately he made them sound fabulous. Within little more than a year And Other Stories had Deborah Levy’s Booker shortlisted Swimming Home on their list. Then it was Peirene Press, and Bluemoose, CB editions and a resurgent Pushkin, Penned in the Margins, Civil Coping Mechanisms, and the periscope finally broke the water once and for all when Galley Beggar published A Girl Is A Half-Formed Thing.

Self-publishing retains all the possibility it held when I started, and boundary-shifting collaborations like Pankhearst (https://pankhearst.wordpress.com/) and form-stretching works like Lucy Furlong’s stunning psychogeographic maps (https://lucyfurleaps.wordpress.com/) represent the its buzzing hinterland. But these days when you take the bus to self-publishingville, you’re more likely to step onto the pavements of Dalston than 1920s Berlin. The key to being happy there is knowing that’s the way the land lies, and having a map. Preferably one of Lucy’s maps!