Cyrus Bozorgmehr is a creative consultant and author who lives in Marrakech, where he continues to write and work across a spectrum of creative adventures. He spoke to whitefox about his busy year – The Syndicate is his first fiction novel (available now via Amazon) and he also acted as senior adviser to the Wu-Tang Clan’s Once Upon a Time in Shaolin project. Jacaranda Books acquired UK rights for his non-fiction novel about the project and will publish Once Upon a Time in Shaolin in November.

The Syndicate is your first novel. Tell us a little about the book and what inspired you to write it.

It’s an irreverent exploration of self-reinforcing reality bubbles and the extraordinary ability of human beings to sabotage utopian potential. The relativity of truth aspect was very much inspired by the Trump campaign – the effect it had on both the media landscape and the very notion of objective fact.

I had also been involved in many idealistic movements over the last 20 years and almost without fail, they set out egalitarian, pure and well meaning and generally ended as a mirror image of what they had originally defined themselves in contrast to. I know this is a well trodden literary theme perhaps best encapsulated by Orwell’s Animal Farm, but I wanted to remix those ideas for the 21st century – it’s clear that this is a lesson we either resolutely refuse to learn or else we have some form of collective amnesia hardwired into our DNA.

So the book takes on some of these issues – both in the microcosm of a renegade band of idealists and in macrocosmic form – social networks and the internet.

By the end of 2017, you’ll have had two books published: self-published fiction novel The Syndicate, and traditionally published non-fiction book Once Upon a Time in Shaolin. How have the processes differed and what have you learned about the publishing industry as a whole? 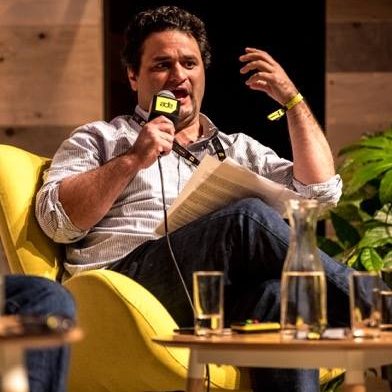 I have had a truly wonderful experience with my publisher, although the very nature of the process means that it takes around 18 months from agreement to publish. With The Syndicate, I needed to get it out within about 5 months because I wanted it to dovetail with Once Upon a Time in Shaolin and the self-publish route allowed me to do that, while producing a book of the highest standard.

One thing I hadn’t realised about the publishing industry is just how collaborative it is. When I was paid an advance for Once Upon a Time in Shaolin, I was nervous about just how much control I had signed over. Could they just impose edits and designs on me? In fact – I got almost everything I wanted, but I also deferred on some other aspects – not because they leant on me in any way, but because they had respected my wishes so wholeheartedly, I genuinely wanted to respect theirs.

How much did you know about the publishing process before embarking upon it yourself?

Virtually nothing. It’s been quite the journey!

How has your approach to writing changed as you’ve gained more experience?

Edit, edit, edit some more – and then give it an edit. The best lesson I ever learned was when you think it’s perfect, take away another 10 percent. Less really is more and as a young writer, those streams of consciousness seem so pure and editing seems like a corset, but it really is about completing the sculpture with a razor blade. Words out of place matter. Self indulgence matters. The tiniest thing can ruin the flow for a reader and they won’t forgive you for it as it shatters the suspension of disbelief.

I edit day to day – reading and editing at least five times.  I’ll read the passage to my wife, and almost without fail, the act of reading it out loud catches a few clunky phrases or overruns that had slipped through the cracks.

What are you reading at the moment and what is the one book that you think everybody should read?

I’m currently reading The Silk Road by Peter Frankopan. On what I think everyone should read – that’s tricky as a lot of those will already have been read by everyone so I’m going to go for a total wild card that may well be too out there for many – The Cosmic Serpent by Jeremy Narby. Genuinely thought provoking, even if some of the conclusions could be considered a leap.