Ben Hatch is a writer, family man and self-proclaimed ‘lover of cheese’ with both fiction and travel books to his name. He has built an extensive Twitter following, which has helped catapult his book ‘Are We Nearly There Yet’ to the top of the Kindle non-fiction charts, and even made John Cleese laugh. 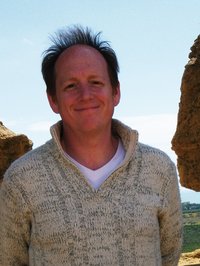 Self-promotion was vital to the success of Are We Nearly There Yet?; can you tell us a little about how you used social media to make the book such a hit?

It all started when I joined twitter (a medium which, I am embarrassed to say, I had been previously been hugely skeptical of). I’d had some great advanced quotes from the likes of Terry Wogan, Danny Wallace, John Cleese, David Jason, Sophie Kinsella, Lisa Jewell, Mike Gayle, Jenny Colgan and others, but the book wasn’t in any shops and was getting almost zero publicity, so there was no way of telling anyone about all those kind words. The book was bombing; a serialization in the Express was canned when the London riots broke out and I was desperate. So I started tweeting the quotes, with friends very kindly retweeting to get some momentum going. Crucially I also stopped feeling helpless; it was no use complaining the book was being overlooked, that the publicity people at my publisher had moved on to other titles (though naturally I did complain about this!). Nobody else cared as much as I did, so it now felt up to me to get the word out.

I also contacted local radio stations, telling them a little about the book, along with funny stories from it that had happened in their towns. In all, I probably did 40 or so radio interviews. I then tweeted about these interviews, which earned me more and more retweets. Terry Wogan mentioned the book on his radio show and John Cleese tweeted about the book. But oddly it wasn’t so much the actual fact that I was mentioned/tweeted about as it was my own telling people that led to more sales and reaction!

After this the book got picked up for review – unusual, given that it had been out for some time at this point. One of my favourite authors John Harding gave me a lovely review in the Daily Mail. I appeared on Radio 4’s Excess Baggage. The Guardian gave it a little write up. Fran Kellett at the Daily Telegraph travel online also featured ten extracts. And many kindly book bloggers ran pieces as well. All the time I would retweet these reviews, expanding the audience that saw them.

I managed to get the book up to the Number One spot in Non-fiction, and it stayed in the top 100 for almost half a year. I was almost as proud of that fact as I was at having written the book in the first place. It felt like I had taken on the entire book world and won. My book from a tiny publisher that I’d been paid £2,400 to write was outselling all these well-known authors and celebs. I had written two novels before Are We Nearly There Yet? and not done a thing for either of them in terms of self-promotion. It had not seemed the kind of thing a published author did. Now I’d say it’s crucial.

You might feel uncomfortable blowing your own trumpet but nobody else is going to do that for you (and they probably won’t even, at the best publishing houses). If you want to stay a writer in these very difficult days for authors when the shelves are swamped with celeb and misery memoirs, you’d better bite the bullet and start. You’ll get people complaining about it, telling you that’s not what twitter is for. But at the end of the day it’s your passion and your livelihood and if you’re talking about something you’re proud of, well, then that’s fair enough in my book. So be thick skinned.

How do you see the writer’s role within publishing changing/expanding as new digital and self-publishing models evolve?

I think the writer is absolutely central now in a way that they never used to be. Unless we’re talking about those at the very top of the cash tree, it’s now the writer who defines how they’re seen in the wider world of readers through their websites, twitter and facebook. Publishing houses remain important for editing and covers can be critical, but in terms of promotion and finding an audience, that’s down to the author. In fact I believe that will become even more apparent over time if things continue the way they are. As mainstream publishers begin to ignore middle list writers in favour of fishing more and more in the sales-safe waters of celebrity, and not being prepared to nurture talent in the long term if there’s not going to be an immediate return on their investment, then self-publishing will become more and more important. I can see if things continue the way they are going that publishing houses will evolve into simple add-on marketing departments for Saturday night TV stars, musicians and actors who want to tell their story in a few more words than a weekend supplement allows. That said there are exceptions such as my own publisher, Headline. Can you tell I’m pitching them a new book right now?

How do you set an idea for a new book in motion?

I used to just sit down, write and make it up as I went along, but since I’ve had kids and enjoy less work time, I have to plan more to speed things up. I do a rough chapter breakdown and use that very loosely to stop me straying too far off course but ultimately the final book never really looks much like the original idea. You’ll always hope to find a spark of honesty halfway through that carries the book off in an unexpected direction that also gives it its true heart. I wish I could, but I can never envisage what this is at the start. It does make writing book proposals tough. My proposal for Are We Nearly There Yet? never included the storyline about my dad, which turned out to be it’s central element. My proposal for Road to Rouen included nothing about the the marriage situation between my wife and I; again it’s point.

Finally, what are your top visibility tips for new authors?

Twitter has to be the main one. Get yourself on twitter. There is a great community of authors out there and wonderful discerning readers. Try and link up with them. They’re lovely. You can find me there: @BenHatch